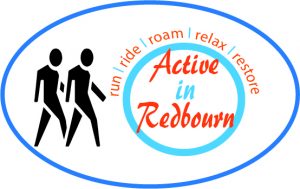 Just 25 miles north of Central London, Redbourn is in the heart of the Hertfordshire countryside. With its gentle hills and well maintained pathways it is  ideal walking country.

Using the village as a base, there are tens of walks for people of all ages and abilities. From a simple stroll around the common to 16 mile hikes you will find some of the best walks in England.

Walking is simple, free and one of the easiest ways to get more active, lose weight and become healthier.

Sometimes overlooked as a form of exercise, walking briskly can help you build stamina, burn excess calories and make your heart healthier.

You do not have to walk for hours. A brisk 10-minute daily walk has lots of health benefits and counts towards your recommended 150 minutes of weekly exercise.

For more walking advice from the NHS click here

The Redbourn Mile is one of 6 heritage walks (average 2 mile duration) created by Joyce and Richard Clayton.  Click here to access their on-line guide to the walk

Once you are into the mile just click on any of the many photos of buildings that surround the Common and enjoy reading a commentary / history of each.  What’s even better is that any walker can do this off their mobile as they stroll around the common.

Please feel free to share with others and help to publicise the Redbourn mile , healthwalks and the heritage / village web site.

Other Active in Redbourn Walks

These walks have been specially created by the AIR team:

No. 1 Redbourn to Flamstead

No. 2 Redbourn to Rothamstead 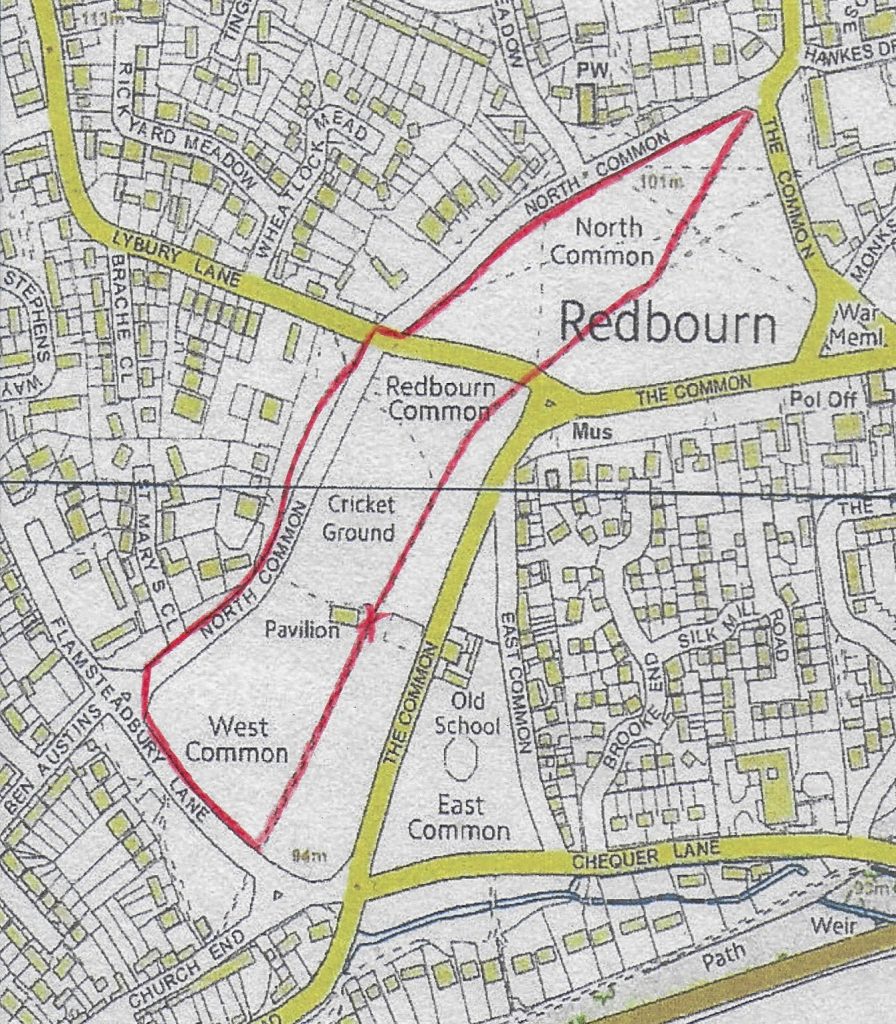 How to use The Redbourn Mile 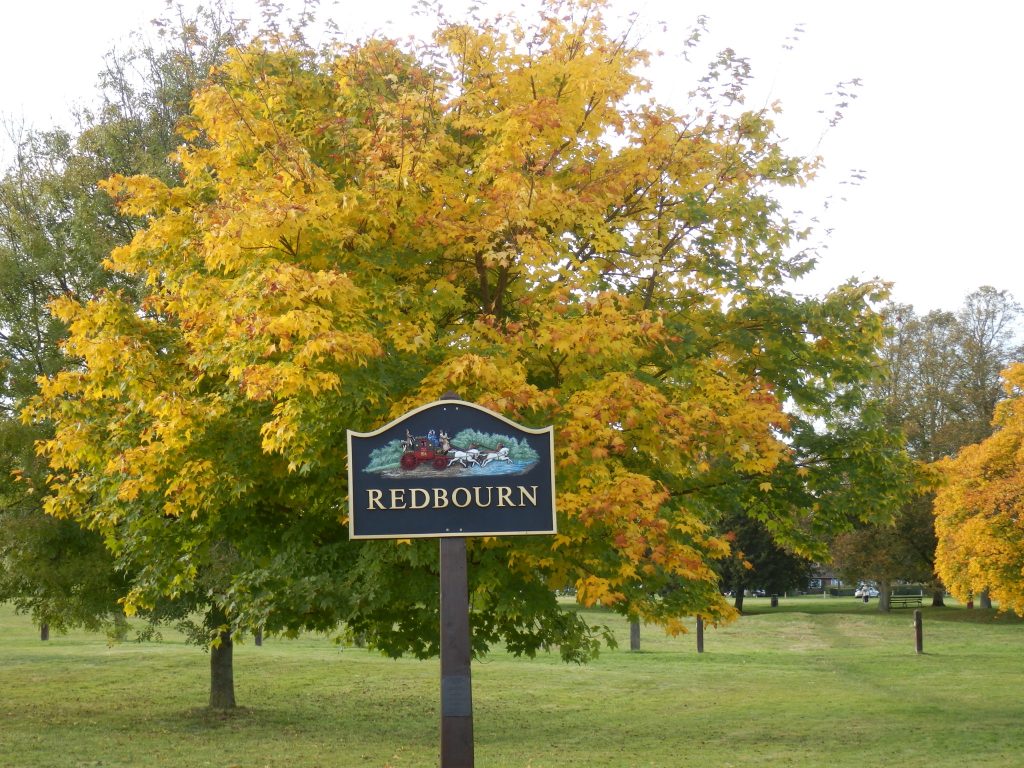 Discover the Redbourn Mile,  an Active in Redbourn route around Redbourn Common. It is a leisurely walk around one  mile in length a good healthy distance to walk,  run or jog to help maintain a your well being. Although (because of the car park) the cricket pavilion is a good place to start, you can start anywhere on the route. Take care when crossing the roads making sure that children and dogs are under control.

The Common has a rich history having been used for many purposes. En route you will see many buildings and vistas all with stories to tell.

Walks in the past

The History of Redbourn Village

The village of Redbourn is steeped in history. It is on Watling Street, the old Roman road connecting London to Holyhead. As  St Albans, Redbourn became a major stopping off place for horse drawn mail coaches en route to and from the capital. There were over 25 inns. Today there are just 4 pubs left. There is an ancient burial ground. Parts of St Mary’s church are Norman.

There were watercress beds on both the village streams. Near the common on the south there was a silk mill and a brush factory. A branch of the Midland Railway ran from Harpenden to Hemel Hempstead through Redbourn. Closed in the 1960’s it is now the Nickey Line.

There are connections with Elizabeth 1st and others listed in a comprehensive early history. More information……The

In all Joyce and Richard Clayton have created 6 heritage walks. They cover:

Each walk is lovingly described and illustrated with images from today and from Redbourn’s past. There are versions for kids as well as adults.

They are a great way to discover more about our wonderful village history. You will be surprised by some of the stories, 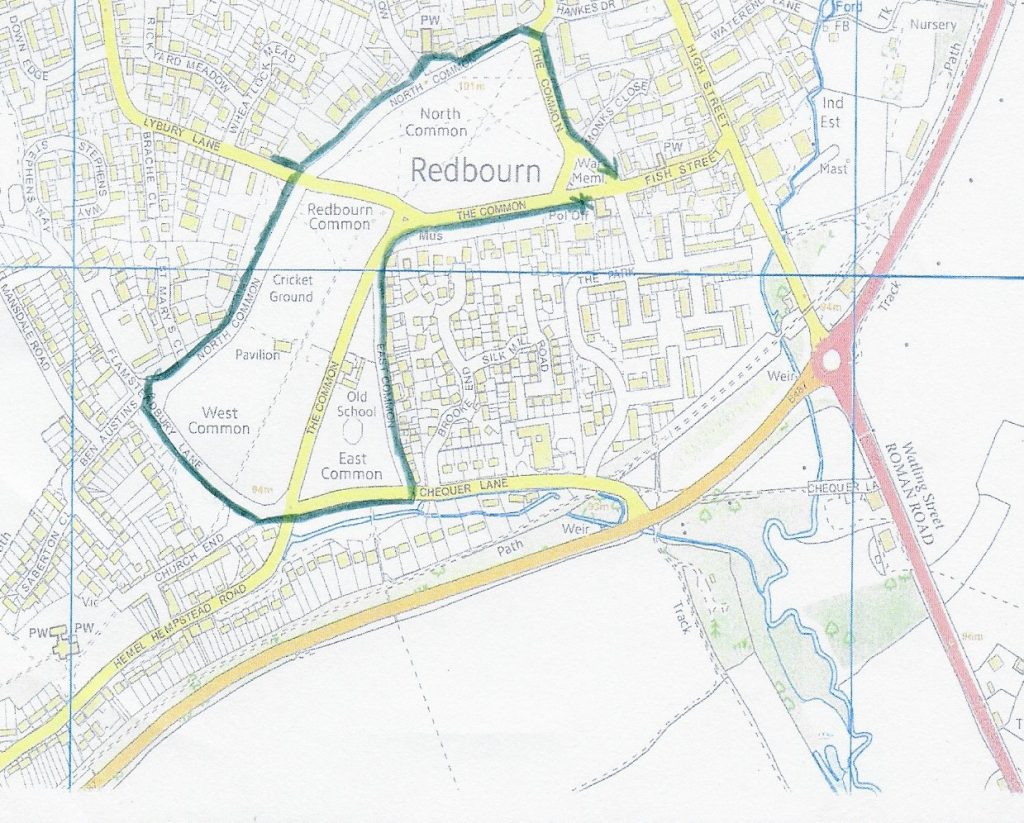 Our countywide initiative of free, led walks aims to encourage people of all ages and abilities to get outdoors, get more active and reap the benefits.

More information about Hertfordshire Health Walks can be found by clicking here.

You can become a Health Walks leader. Click here for more information

You can also visit our Facebook page, call 01992 588433 or email us for more information on Health Walks and volunteering. 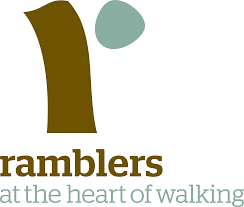 The Ramblers is a charity whose goal is to protect the ability of people to enjoy the sense of freedom and benefits that come from being outdoors on foot.

We’re an association of people and groups who come together to both enjoy walking and other outdoor pursuits and also to ensure that we protect and expand the infrastructure and places people go walking.

The Redbourn local group is the West Herts Ramblers (WHR)

We are keen to encourage new members to join us and to spread the word on the benefits of walking. New members are welcome to join us for a couple of taster walks before committing to membership.

We have at least one walk every Sunday and one Tuesday a month ranging from 3 to 15 miles with most being between 5 and 10 miles. We walk in the beautiful countryside of Herts, Beds and Bucks with occasional forays further afield including London. There is also a programme of social events including pub meals, a quiz, talks and two long weekends away each year. 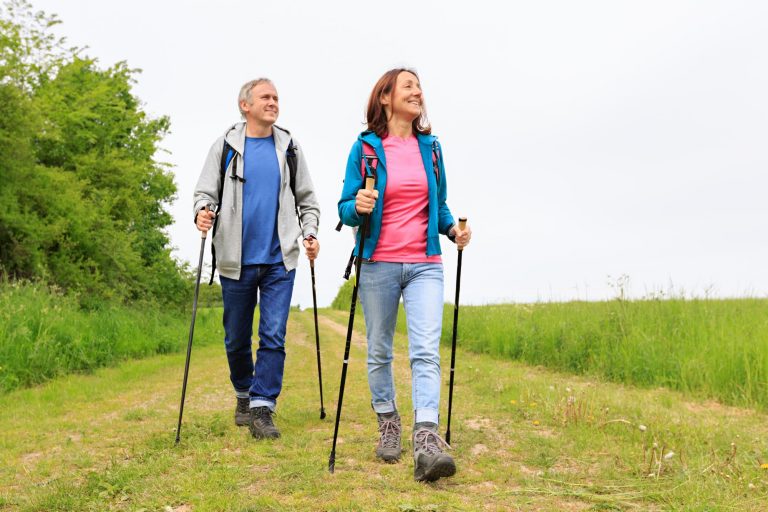 Nordic walking is a full-body exercise that’s easy on the joints and suitable for all ages and fitness levels.

What is Nordic walking?

Nordic walking was originally a summer training regime for cross-country skiers. It’s based on using specially designed walking poles in a way that harnesses the power of the upper body to propel you forward as you walk. It’s now a recognised way to turn a walk into whole-body exercise that can be done by anybody, anywhere.

The Ver Valley Society exists to protect and promote all aspects of the River Ver and its valley. The Society was originally founded in 1976 to promote the Ver/Colne Walk, but shortly thereafter the river, and its valuable water meadows, began to decline due to over abstraction of ground water and climate change.

Chalk Stream In The Ver Valley

The Ver Valley extends from Kensworth Lynch, north of Markyate, south via Redbourn, St. Albans and Park Street to join the River Colne near Bricket Wood.

Chalk streams, such as the Ver, are globally very rare and have habitats supporting a very special ecology. Such water is vital to the flora and fauna typifying a chalk stream. But now the very existence of such rivers, especially the Ver and its tributary the Red, are under threat.

Like much of Hertfordhsire the Ver Valley offers walkers much to enjoy.  It has well documented and signposted footpaths, year round flora, fauna and wildlife, amazing views and superb stopping off places.

The Ver Valley Society has created a series of short walks following the River Ver and exploring the surrounding countryside. Each walk is beautifully illustrated with easy to read maps and instructions. 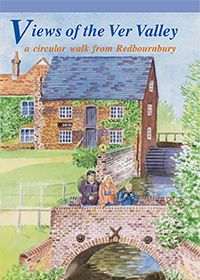 We have selected five walks from the Ver Valley Society collection that have particular relevance to Redbourn. Click the walk to view and download a copy of the leaflet

The St Albans and District Footpaths Society is a Registered Charity which exists to keep footpaths open for everyone to use. We are a friendly group of people who enjoy exploring the beautiful countryside around us by walking the footpaths.

The Society depends entirely on volunteers and is run by its members for its members. All our walks are led by our own members. When you become a member we trust that you too will help with our work by volunteering to lead a walk, join the Work Group, take on an administrative role or help in checking footpaths

Recently revised and updated 7th edition of “24 Footpath Walks around St Albans”. All walks have been checked and amended where necessary, all maps redrawn and now include directional arrows. Walks vary in length from 11.5km/7.2 miles to 6.6km/4.1 miles, some with shorter or longer alternative routes.

Over 100 Points of Interest are listed, together with information on local Geology and Landscape, Land Use, Building Materials and Place Name Elements.

THE ‘BROWN BOOK’
The Society’s other publication “24 Footpath Walks in Hertfordshire”, now in its 5th edition, has walks varying in length from 22.75 km/14.2 miles to 8.5km/5.3 miles, with some shorter alternative routes suggested.

How to buy the books

For many years, income from the sale of our two publications has enabled the Society to finance a range of projects in the district.

This website uses cookies to improve your experience while you navigate through the website. Out of these, the cookies that are categorized as necessary are stored on your browser as they are essential for the working of basic functionalities of the website. We also use third-party cookies that help us analyze and understand how you use this website. These cookies will be stored in your browser only with your consent. You also have the option to opt-out of these cookies. But opting out of some of these cookies may affect your browsing experience.
Necessary Always Enabled
Necessary cookies are absolutely essential for the website to function properly. This category only includes cookies that ensures basic functionalities and security features of the website. These cookies do not store any personal information.
Non-necessary
Any cookies that may not be particularly necessary for the website to function and is used specifically to collect user personal data via analytics, ads, other embedded contents are termed as non-necessary cookies. It is mandatory to procure user consent prior to running these cookies on your website.
SAVE & ACCEPT